Although we temporarily put a hold on Shell seismic blasting, we call for the South African High court to implement a permanent ban on Shell Seismic surveys in South Africa. Kindly sign and share the petition. 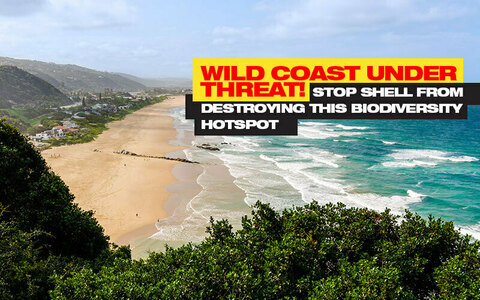 On the 1st of December 2021, The Anglo-Dutch Multinational oil and gas company Royal Dutch Shell is set to start an oil and gas exploration project across 6,000 square kilometres of the Indian Ocean. We've all seen the devastating impacts of oil spills on coastal communities and marine ecosystems, and wildlife.

The images of the Mauritius oil spill are still fresh in our minds from just over a year ago; this must not happen again. The oil and gas exploration project will send seismic waves using airguns deep into the ocean to identify the potential for oil and gas.

These airguns use loud blasts repeatedly and are so noisy that they penetrate through the ocean and deep into the seafloor. The explosions generally go off every ten seconds, 24 hours a day, and often for weeks on end. They are so loud that they penetrate through the ocean and miles into the seafloor, then bounce back, bringing information to the surface about the location of buried oil and gas deposits.

Airgun blasts are incredibly harmful to marine life and could lead to temporary and permanent hearing loss, habitat abandonment, mating and feeding disruption, beach strandings, and even death.

Considering the potential for catastrophic human and environmental impacts of such activities, we are calling on Barbara Creecy, Minister of Environments, Forests and Fisheries in South Africa, to provide us with answers as to why this is being allowed and immediate revocation of Shell's license to operate such harmful equipment in the region.

Shell's proposal is based on a flawed study and relies on licenses issued under a cloak of secrecy during the corrupt Zuma administration. Stakeholders have not been thoroughly consulted or given time to respond to this plan.

Why is this important?

For decades, South Africa's Wild Coast has been a pristine and untouched coastline vital to the biodiversity of the Eastern Cape and Kwa-Zulu Natal.

Such a plan will impact impoverished communities hardest by devastating fish populations in shallow ocean water and the Wild Coast and Eastern Cape rivers.

It will also devastate whale and dolphin populations who will beach and become disorientated due to the constant seismic blasting.

Please support this petition before it is too late.

Petition is successful with 2,601 signatures